Our recent publication with collaborators from the

group at Moffitt Cancer Center on the role of IDH1 mutated tumor cells in glioblastoma has been downloaded over 250 times in the first quarter of 2011, making it among the top 10% most downloaded manuscripts in all IOP journals!

Swanson lab publication, Predicting the efficacy of radiotherapy in individual glioblastoma patients in vivo: a mathematical modeling approach has recently been published in the Journal of Physics in Medicine and Biology and is a featured article on medicalphysicsweb.org!

“In her laboratory at the University of Washington, mathematician Kristin Rae Swanson peers into the future of brain cancer patients–on her computer screen.

She has created a software program that uses data from magnetic resonance imaging scans to simulate how fast a patient’s brain tumor is likely to spread. END_OF_DOCUMENT_TOKEN_TO_BE_REPLACED

“UW CSE undergraduate Rita Sodt will travel to Washington DC on April 13th to participate in the 14th annual “Posters on the Hill” program sponsored by the Council on Undergraduate Research.  The goal is to expose Members of Congress to the importance of undergraduate research. ”

Rita works with UW Pathology professor Kristin Swanson on mathematical models to simulate brain tumor growth.  The models make it possible to make predictions about how a tumor will spread, leading to improved tumor treatments.

The full article is listed here. 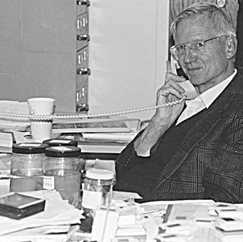 “It is with great sorrow that I inform you of the death of Dr. Ellsworth (Buster) Alvord, a beloved colleague, friend, teacher and mentor. Buster received his M.D. from Cornell University in 1946, trained in Pathology and Neurology at New York Hospital, Walter Reed Hospital and the Armed Forces Institute of Pathology, and from 1953 to 1955 was Chief of the Neuropathology Section of the National Institute of Neurological Disease and Blindness.  From 1955 to 1960 he was an Associate Professor of Pathology and Neurology at Baylor College of Medicine. He joined the Department of Pathology at the University of Washington in 1960 as an Associate Professor, was promoted to Professor in 1962, and became an Emeritus Professor in 2002. In addition to the Pathology appointment, Buster had an adjunct appointment in Neurological Surgery.

Buster was the founder of Neuropathology at UW, and was not only a pioneer, but also had an active involvement on research, teaching and service activities in neuropathology for almost 50 years. ”

Read all about him here.

Right now, Susan is working on developing and testing a new mathematical model for glioma genesis and evolution mediated by the dynamics of platelet-derived growth factor. This work is in collaboration with Dr. Peter Canoll at Columbia University.

“Rita is recognized by the CRA for her research on modeling and predicting the growth of highly invasive brain tumors called gliomas. The current treatment and management of gliomas is limited by the ability of present imaging technologies to assess the true extent of the tumors. To address this limitation, Rita’s research focuses on enhancing a mathematical model of tumor growth to more accurately reflect observed growth. Instead of assuming isotropic tumor cell diffusion, she is investigating anisotropic diffusion because it has been observed that glioma cells migrate preferentially along white matter tracts in the brain. She compares simulated growth with the observed growth in individual patients to determine which technique more accurately predicts the growth of gliomas in vivo…”

“Rita Sodt was so motivated in her desire to experience research first-hand that she contacted a researcher early in her freshman year at the UW. She learned about Kristin Swanson, research associate professor of pathology, from the TA in her honors calculus class and took the initiative to arrange an interview, securing a place in the lab by Winter Quarter. END_OF_DOCUMENT_TOKEN_TO_BE_REPLACED

“University of Washington researchers have discovered a way to more accurately predict life expectancy in patients newly diagnosed with Glioblastoma Multiforme, the most aggressive form of primary brain tumors — and the type that took the life of Senator Ted Kennedy earlier this year.

This type of tumor accounts for 70% of malignant brain tumors diagnosed in the U.S. each year, and patients on average live only 12 to 18 months following diagnosis.

Researchers in the lab of Dr. Kristin Swanson, UW associate professor of pathology, have found the combination of biomathematical modeling and routinely available pre-treatment magnetic resonance images (MRI) allows physicians — for the first time — to quantify and visualize patient-specific tumor growth patterns and dynamics. The results are published in the Dec. 1, 2009 issue of Cancer Research.”

“The physical microenvironments of primary and metastatic cancers are highly heterogeneous and almost invariably different from normal tissue. Abnormal tumor vasculogenesis and chaotic blood flow lead to chronic and acute (often cyclical) hypoxia.  Abnormal glucose metabolism due to hypoxia and aerobic glycolysis leads to acidosis.. This program will examine the role of the physical microenvironment in carcinogenesis, tumor progression and metastases. A major focus will be translational as we actively perturbations in the microenvironment as novel cancer prevention and treatment strategies…”

Read all the information here.